Chappaquiddick Island is a part of the Town of Edgartown. You have to take a small privately owned, barge-like ferries to get there.

The barge takes up to three vehicles and drivers, a few people and a few bikes. The line for the barge is long during the season. The ride is about 2 minutes across the channel, so it goes pretty fast.

Chappy, as it is affectionately known, is just 6.145 square miles of land. It was home to the Chappaquiddick Wampanoag Indians until the 19th century. Now there are less than 200 people on the island. There are no stores or lodging, but there is a private beach club, a wildlife reservation and a lighthouse. It’s an absolutely beautiful place to visit. It is well worth the effort it takes to get there, especially if you’re into nature. The beach is never crowded, you’ll feel like it’s your own private beach. Bring everything you think you’ll need, remember, no stores.

The Trustees of Reservation owns and manages about 1,000 acres of land that includes a beautiful beach, walking trails, birding, paddle boarding and the Cape Poge Lighthouse.The lighthouse is one of the 5 lighthouses on the Island.

This little Island was put on the map by an incident on July 18, 1969 involving U. S. Senator Edward Kennedy. He drove his car off of a small footbridge and a young woman, Mary Jo Kopechne, was found drowned in the submerged car. That’s the nutshell version.There is a feature film that was released April 6, 2018, about this incident. Everything you ever wanted to know and were afraid to ask is depicted. 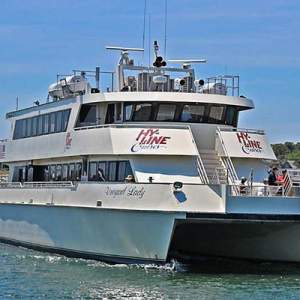